This morning it was 13' and freezing cold. I met two of my tri-chicas at a local yoga studio for Hot Yoga. It was awesome. The instructor cranks up the heat to 90' and then gave us a kick ass power yoga class. It definitely warmed me up, for sure. I loved it. There were two women there that were probably in their 60s and they were so inspiring. They were strong, flexible and quite stunning. Yoga is so cool.

I have my cholesterol checked every year because it is a little high. In addition so is my cardiac-serum protein. Both of which indicate some cardiac disease. My naturopath always had a suspicion that my cardiac-serum protein was high because I ran so much. She deduced that since I ran so often I was probably inflammed all over. Well I told her this would be a good test to see if her conclusion was right. I haven't ran further than three miles at a time since Oct. I have been working out at the gym, swimming and practicing yoga-all low-impact activities. Well....the verdict is in.....

My cardiac-serum protein was the lowest it has ever been! Actually all my numbers were better this round of blood tests. I think I will have to agree that long distance running really is not that good for us. This same naturopath told me to compare a sprinters body with a long distance runners body and tell her which I think looks healthier. Hands down, the sprinter is a lot healthier looking. Their muscles are toned and they appear to be at a more natural weight as well.

Too bad I am addicted to long distance running! I figure I will work out smart in the winter and go crazy running the other three seasons. Actually I work out smart in the summer too while I train for triathlons. Ok two out of four seasons aint too shabby :)
Posted by Run for Chocolate at 1:35 PM 1 comment:

I have sufficiently rested from the Chicago Marathon, I think. I was not at all interested in running after the marathon. I had fun running the Turkey day race but only because I ran it with my sweet lovable almost brother in law. I suffered through a very grulling (sp?) New Year's Day run. I have run a handful of times in between but mostly I have been staying indoors playing around at the gym. It has been a lot of fun. I love lifting weights, my guns are really getting defined, I almost don't have the upside down muscle shake anymore. Almost :)

But....I was sitting next to my fellow nutty runner, my stepdad while we watched our UCONN Huskies stomp all over Texas on Sat and during half time we got to talking about....running. He is on the way to completing the 50 states marathon challenge and he plans to run a marathon in Nebraska on May 2.

And there's a half-marathon....Maybe just maybe! Any bloggers wanna meet up in Lincoln, Nebraska?
Posted by Run for Chocolate at 6:24 PM 2 comments:

I set out this snowy cold morning to try my first "hot" yoga class but my new, good-gas-mileage car sucks in the snow. Oh well can't have everything, right? So I headed to my gym which is about ten miles closer. Lo and behold there was a 9am yoga class at my gym this am! I set up next to a little old man that had to be about 85 years old. He was the cutest thing I have ever saw do yoga. I just hope I make it to see his age and man I hope I am still doing yoga :)
Posted by Run for Chocolate at 11:53 AM 1 comment: 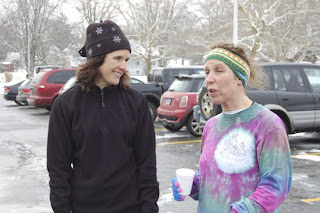 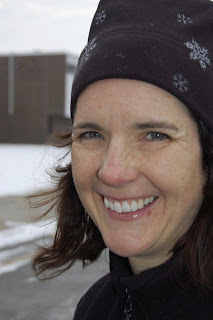 Well, we started 2010 we lots of snow and some running! Here I am with my sweet friend, Fran enjoying champagne after our 6 miler on New Year's Day.

I have had years where I want to run a race per month and years where I did not set any goals. It definitely helps me to wake up and get moving if I have a goal. My main goal this year is to stretch my psoas everyday and get my hip better as well as prepare for the olympic distance tri in August. I will have to research some other races earlier in the year to gear up for or else!

I have been working out at the gym about 5 days per week while running about 2 days as well. I feel good. I am not loving running lately and welcome the break from the daily grind of hitting the pavement. I am totally loving my shapely arms from lifting at the gym. Boo-rah!!!
Posted by Run for Chocolate at 7:12 PM 2 comments: