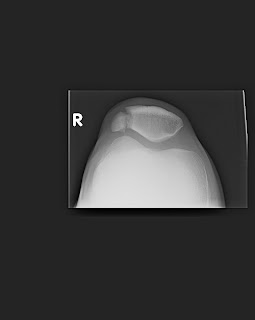 Last Sunday I was watching UConn play Louisville and I get a phone call from son 1. Uconn was up by 2 and Gampel was so loud there was no way I could hear him if I answered so I texted him. He texted that he hurt his leg trail running and needed to go to the hospital. I assumed he needed stitches so I texted him to just go and I would be there when the game finished in like 30mins. Believe me with three boys, the hospital has our information on file :)

We actually arrived at the ER at the same time and that's when I became concerned. The texts didn't communicate the level of pain he was in. He was unable to get out of the car or walk in to the hospital on his own. I have had plenty of cuts from trail running and knew you should be able to walk even if you have a big gash. We wheeled him into the hospital and lucky for us it was a slow night and we got right in. We have waited for five hours before to get five lousy stitches so I was thinking things were looking up!

Until I saw the pain the poor kid was in.

I knew before they xrayed that something was terribly wrong. He broke his knee cap. A complete break. And the cut he needed his stitches was deep, all the way to the bone. So they are also worried about bone infection.

He was unable to have surgery that night due to the cut, they were afraid it would contaminate the joint since the break was on the other side of the knee. He will probably get surgery on Wed. depending on the swelling and healing of the cut. He is in a TON of pain. It is awful.

How did he do this, you ask? Running like a bat outta hell down hill on a slightly wet day, tripped and fell and hit his knee on a rock. How did he get outta the woods since his mom was a ditz and didn't get how serious it was? His very strong friend, Devon, fireman carried him out of the woods. Luckily Tommy is only about 155lbs soaking wet so Devon only had to stop a few times to catch his breath.