Oh my goodness What A Blast!!!!

Travis, Jabez and I started our adventure with a 8am departure, stopping first for bagels of course! We made it to Boston in about an hour and half and got to the packet pickup at 11 almost the first ones there. What fun, we perched ourselves close to the entrance and watched all the crazy costumes! There were two teams of bees, a team of ducks, Dr Spock and that other guy from Star Trek oh yeah Captain Kirk, sharks, angels and demons, just plain angels, and on and on.

At noon, the race organizers handed out our 12 clues. We had to wait till everyone got an envelope before we could open them. Holy toledo, the questions/tasks were so hard. Luckily my oldest son was home and googled us the answers to most of the problems but some were tasks we had to do like find people with red socks and a Red Sox jersey on or shake hands with a dog. It was legal to have a phone a friend and to ride the T or public buses. You couldn't ride a bike or hire a taxi.

Some of the tasks were so obscure, I just don't understand them. Like one was to find something that holds 230 gallons, 2 quarts, 1 pint and three gills. It was this random huge teapot at Starbucks and we only got it because we saw other teams there and Travis spotted the words on the kettle.

But some tasks were really fun. At KO Prime, this fancy restaurant they set up a "Who dunnit?" type problem with 15 clues all over the restaurant. It was really funny, all these people running around looking for clues.

The race has a 5 hour limit and I thought oh no problem we will make it in about 3 hours. Well we had to book to the finish line for the last few miles to make it in at 4 hours 55 minutes!!! I was so happy we made it in the 5 hours.

We probably ran about 8 to 10 miles over the 5 hours and we were soooooo pooped! I would recommend the Great Urban Race to anyone looking to see a city and have lots of fun. I would definitely do this again. Maybe we will go to NYC or Philadelphia for the next time we give it a go.

Oh my goodness pics will have to follow I can't find my stupid usb cord AGAIN!
Posted by Run for Chocolate at 3:55 PM 2 comments:

Today I woke to a nice trail run with two really awesome friends. That's where the fun stopped.

I came home to help my son do his paper route at about 8. At one house, a kinda weird house, there was a man waiting at the door, sorta weird a 8 am on Sat. When I gave him his paper, I heard a woman yell, "Help, his just threw me!"

It didn't register in my head. I even picked up his other morning paper and gave it to him. She yelled for help again when he opened the door the second time.

That time it registered. I became alarmed and hurried back into my car. I quickly called 911 and gave them my complaint. The dispatcher asked that I wait in my car outside the home until the police arrived. I did what she requested but wow it freaked me out. What was I supposed to do, bear witness to whatever violence might happen next?

The police came within a few minutes and we finished the route, both shaky and freaked out.

Then I had to go about my day wondering what happened to this couple. I am concerned also for my son when he has to deliver the paper on Monday. Ugh.

But that is not where the craziness ends...

After a baseball game and work commitment, I ran home to clean my house before another baseball game at 3. I just started cleaning when my middle son went outside in his barefeet and stepped on a dang roofing nail. Now I have fixed two flat tires from those damn roofing nails and now my son gets punctured as well!

My oldest son and his friend carry him to the car where he proceeds to throw up. It was a pretty gross injury to look at and as long as he kept it covered he was ok.

But guess what? I got pulled over by a friggin cop on the way to the hospital. He saw me talking on my cell phone. Of course he was taking his sweet time getting out of the cruiser and I was beeping my horn and yelling out my window to no avail! So I called 911 for the second time that day! When I finally got my hysterical story out, he managed to get out of his cruiser and I frantically told him what was going on, he took one look at my kids foot and said, "Ok, that works, see ya" I was about half a mile from the hospital. The hospital staff was fabulous and luck for Nick, it was an old roofing nail and about half the size of the nails that punctured my car tires.

Wow it took three days to be able to walk normally after Soapstone. There were tons of hills and even by mile 11 I was tensing going down hill. I took a couple days off, went swimming and finally ran this morning almost a week later! My legs felt great and the new trail I ran was very fun!

Tomorrow: Bike Ride!
Posted by Run for Chocolate at 6:49 AM No comments:

Well my day started with a big brown doggie nose in my face at 5:15! I went to pee the same time as he did and what do I discover? Well lets just say that if I was living during bible times I would be sitting in a red tent with other women drinking wine and gossiping celebrating my women-ness but no such luck...time to grab supplies and fuel up with a bagel and banana.

My brother, girlfriend, Cindy, and eldest son left at 7:30 with no problem finding the race start- a horseback riding camp in Stafford, CT. Check in was easy and well organized. The Bare Naked granola guys were handing out samples. Yum I had fruit and nut granola, yogurt with blackberries. Delish.

The race started at 9am about a half mile from registration site and continued on a dirt road for about a mile. I was exhausted right from the start! I knew that with all the pms bitching I did over the past three days, I would have little fire left once my period started and boy was I pooped right from the beginning.

We reached the four mile mark at exactly 1 hour. The most impressive climb of the race was so cool. I will try to get you pics from my friend's camera phone. It was straight up, no lie. I think that was at mile 3 or so. At the top was a fire stand, I think.

I basically just trudged along for the next ten miles, my two friends encouraging me all the way. I have great friends. We finished at 3:35. The race volunteers had burgers, three bean salad and soda left for us and made us feel as special as those finishing in an hour and half. This was a great race. Very technical trails, lots of mud, wet rocks and leaves, and interesting terrain to keep you entertained. Oh yeah the t-shirt was cute too.

After we gobbled up our burgers, we had to get home to other children but not before we grabbed some hot cocoa and toasted bagels. Its amazing how cold you get after running long.

After a long hot shower, I zipped over to celebrate my little sister's 20th birthday! More burgers, ice cream cake and mojitos!

I need a weekend from my weekend! How am I going to get up and go to work tomorrow?
Posted by Run for Chocolate at 4:30 PM 1 comment: 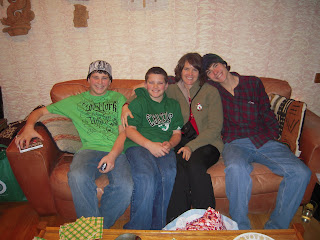 Tomorrow my brother, son and a few friends are heading north about 25 miles to run a trail half marathon. I am so psyched! Got an email about the race yesterday that asked we bring our own plate and fork for the post race party...gotta love those trail runners.

Will let you know how it all went down. My only goal is to finish I have no clue about time since I hear it is a challenging course. Would love to finish around three hours though but no biggie if I don't.

I finally found the usb cord for my camera. This pic is from Christmas but I like it. So share...
Posted by Run for Chocolate at 6:30 AM No comments:

Yesterday I successfully and painlessly ran ten miles in preparation for Soapstone Trail half marathon! I am so psyched. I didn't think I would be able to run Soapstone after aggrevating my hip/inner thigh a couple of weeks ago but cross training and stretching and resting have all really helped.

We are getting ready to head out for breakfast!
Posted by Run for Chocolate at 6:19 AM 1 comment:

Is anyone else tired?

I have been so pooped lately. I am able to work out well in the am but by dinner I just want to go to bed and I can't because we have baseball for three hours...in the cold and rain!

Running, swimming and biking now. I love the warm weather.
Posted by Run for Chocolate at 1:47 PM 3 comments: