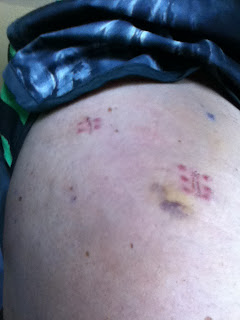 So here are two scars from the portals of my labral repair. I also learned that they released my illiopsoas tendon. I read some articles that suggested that a tight psoas can actually cause the labral tears. One positive aspect of the surgery was that the none of the labrum needed to be removed due to extreme tearing, they just repaired it and anchored it. My bones are "perfect" too, I didn't need any bone work done. I am definitely getting better because I am getting anxious to workout again. I need to sweat! LOL!

Posted by Run for Chocolate at 5:22 AM 2 comments:

Everyday is a little easier. I can drive now with only a little discomfort. I can walk and bear full weight with no pain. My gait is still pretty slow though. I can not lift or twist or bend deeply yet. I get my stitches out Monday! WooWoo! I have gained a few pounds which sucks :(


Posted by Run for Chocolate at 4:09 PM No comments:

So I am totally fine sitting around all day watching tv or reading and doing my exercises BUT HOLY TOLEDO DRIVING SUCKED!!! Having my knees higher than my hip just caused so much pain. My physical therapy place is attached to the doctor's office which was a terrible 40 minutes away. My pain number went from 1/2 to about a 7 by the end of the trip. THEN I had to do the friggin PT exercises and then drive home.

Thank goodness, I don't have another appointment until Thursday!
Posted by Run for Chocolate at 6:11 AM No comments: 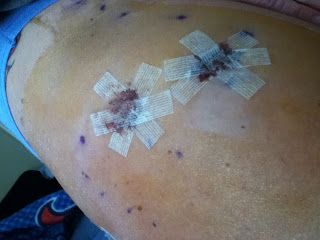 So here you see two of the puncture wounds for the ports for the arthoscopy. I continue to feel great and have very little pain. My hip is a little swollen and sore but I can bear weight, walk almost normally. I am just sitting around watching TONS of movies while I do my exercises. The big event for today is showering! I can't wait, I really need one!
Posted by Run for Chocolate at 9:16 AM No comments:

So I had my labrum repaired yesterday at St Francis Hospital and the doctor says it was a great success. He said I had a big ole tear that he repaired and he has high expectations for my full recovery! Music to my ears. I am still and sore but I haven't even thought of taking pain meds. Physical therapy was tough today though. I am enjoying being waited on hand and foot as well as just sitting around relaxing.
Posted by Run for Chocolate at 2:24 PM No comments:

I have told all of my doctors that I have had the hip pain for about 5 years. Well, i have been reviewing my blog and I noticed an entry from 2006 entitled  'Ouch, my hip hurts!' and I described the pain as localized agony. Yup that is the way it feels. I hope I have enough of the labrum left to repair. If it is so cut up, my hero, Dr Joyce said he would use part of my thigh muscle and glue it in place! Wow just like a paper doll !
Posted by Run for Chocolate at 2:36 PM No comments:

I am falling apart!

So back to ovarian cyst drama...back in March my obgyn told me stop worrying, it is nothing, our bodies make these things all the time. BUT as a precaution, I should come back to make sure it is gone in a month. That appointment was yesterday...well that dang cyst is PERSISTENT! It is still hanging out in my ovary. I spoke with the doctor today and he said go ahead with hip labral tear repair and we'll check on this stubborn little cyst next month.

Ok on to the search for a solution to my hip pain...I started with a doctor that performs open surgery to repair labral tears. It would involve a 9' scar (right through my runner-girl tattoo, kinda ironic, right?) drilling through my ball of my hip to reach the labrum. He suggested I get some other opinions from doctors that perform this surgery arthroscopically.

Next stop, Dr Lena in Glastonbury. Very nice but suggested I wait for my tear to heal on it's own. He said we take longer to heal as we get older. I almost scratched his eyes out after that comment. LOL I know my hip pain. I have dealt with it for 5 years or so. I know it is beyond my control now. I haven't run or play pain-free since September.

So needless to say I kept searching for answers.

That brought me to the super surgeon of the stars, Dr. Michael Joyce. I love him :) He told me I had a tear that needed repair and he could do it. Then he went on to say the surgery would be easy to perform since I was young and slender. I think I scared him when I almost kissed and thanked him for that lovely comment. He quickly said well I mean you are going to be a lot easier to operate on than a football player. Cmon, Dr Joyce just go with the young and slender theme HEEE HEEE!

So I have a date for the repair on April 4! I am scared! Like wicked scared. But I know in my bones (Lol) that I won't get better without surgical help. I will be back to chronicle my experience...promise!
Posted by Run for Chocolate at 12:28 PM No comments:

It has been awhile since I posted and A LOT has happened! After celebrating with Dianna (the girl with orange hat) and Amanda at a friend's 40th birthday, I decided to really figure out what the heck is wrong with my hip. I have had pain in both hips while running for the last five years.I always thought I had tight illiopsoas tendons. I would rest or get massage or go to extra yoga classes and would always be able to recover. Then this past fall, I tried all my tricks and nothing worked. I knew I needed help.

My first stop was to a chiropractor, Dr. Giacolone, recommended by both Dianna and Amanda. He was fabulous and started performing active release technique on my right hip. After three weeks of  treatment, I saw no improvement at all. He suggested I delve deeper and make an appointment with an orthopaedic sports surgeon. After hearing my story, Lance Morgan, PA ordered a hip anthrography MRI.

I went to Open MRI in South Windsor. They were great. A doctor takes an xray of the hip joint, then he places a needle into the joint and shoots dye into the joint. I got to watch the entire procedure, it was so cool! Then I was wheeled into the imaging room and spent the next 45 minutes hearing techno music sounds LOL.

At my follow up appointment with Morgan, he confirms that I have a labral tear in my right hip. The more disturbing news though was that I had a cyst on my left ovary and he told me to make an appointment with my OBGYN as soon as possible. I was SCARED! After a few appointments and ultrasounds, the obgyn doctors said I am fine. PHEW!

So then Morgan tells me the options I have to fix my tear...open surgery or arthoscopic. He said arthoscopic surgery is tough on the hip though and tells me to be choosy and make sure whichever doctor I go with understands that I want the labrum repaired not removed. Then he sends me on my way...he was such a sweet P.A. He made an appointment with his colleague on his cell phone for me for the very next day!

Part 2 of this story will follow...on to the gym with my Travis!

Posted by Run for Chocolate at 7:43 AM No comments: